Like many things involving open source development, the jQuery project is designed to be worked on in a Unix-like environment such as OS X. Most regular people have a Windows machine (around 90%) but developers aren't regular people. Regardless, I primarily develop on Windows and I recently wanted to work with the jQuery code base and found the instructions for setting up your environment on Windows to be a little outdated. Thankfully the open source world is getting much friendlier for Windows developers. This article covers the official jQuery instructions and my preferred setup.

Likely because the jQuery developers are busy with more important things, the documentation for actually setting up your environment to properly develop for jQuery is a little sparse. In the case of a Windows setup the documentation is also a little outdated and possibly overkill.

The links provided to Node.js on the jQuery GitHub page are to old binary builds of Node.js for Windows. Node.js was recently updated with a full installer for Windows thanks to Microsoft. You can download Node.js for Widows here.

If you install the full version of msysGit you shouldn't need to also install GNU Make (more details below). More importantly, When you install GNU Make by itself it actually doesn't work. The jQuery make file is filled with Linux-specific shell commands that Windows doesn't support natively so the build will always fail. It's actually not possible to fix it by re-writing the Makefile to be Windows compatible because Windows batch files aren't as full-featured as a Linux shell script.

Cygwin is a "collection of tools which provide a Linux look and feel environment for Windows." It's nothing too magical; it basically ports common command-line programs to Windows. For instance, normally in a Windows command prompt to get a director listing you'd have to type dir but on Linux you type ls and the results looks different. What Cygwin does is makes the ls command (and many others) work correctly on Windows. It doesn't, however, make Windows magically become Linux. The primary benefit is that programs that rely on Linux command-line tools (but don't require Linux specifically) can run on Windows using Cygwin. However, Cygwin is a bit overkill for our purposes. We don't need a "complete UNIX/POSIX environment on Windows."

Cygwin isn't necessary if you install the full version of msysGit (more details below).

WAMP is a great tool for getting up and running with Apache, MySQL and PHP very quickly. There's no doubt that WAMP is extremely popular. However, for the sole purpose of running the jQuery unit tests it's a bit overkill. For instance, there's no need for MySQL at all and Apache is just one way to run PHP in Windows.

The msysGit download page is needlessly confusing with a range of different packages available. The two important versions are the "Full installer for official Git for Windows" and the "Full installer (self-contained) if you want to hack on Git." The primary difference between the two is that the self-contained version is "complete, in the sense that you just need to install msysGit, and then you can build Git without installing any 3rd-party software." The differences are explained in the msysGit wiki.

The part about being "complete" is key because, similar to Cygwin, the developers of msysGit have re-created a handful of required Linux commands and made them compatible with Windows (actually the MinGW guys did it). This essentially means that installing msysGit gives you something similar to what Cygwin offers. More importantly, you can use those commands for building jQuery on Windows without installing anything as large or complex as Cygwin. MsysGit actually includes a full version of GNU Make as well so there's no reason to download GNU Make separately.

The net install version is different than the version used in the Github Instructions for installing Git on Windows. If you've already installed that version it's ok. You can leave it in place and install this version as well. What we're really after is the GNU Make that comes with the netinstall of msysGit.

TortoiseGIT is totally optional but it is nearly as full-featured as TortoiseSVN and is an extremely easy way to work with Git on Windows. I would highly recommend it for anyone new to Git, particularly if you've used SVN in the past.

The Node.js installer is really straight-forward. After installing you may need to restart your command prompt to make the node command available.

Both Git and Node.js need to be added to the your windows environment paths.

Installing IIS and PHP for Windows 7

IIS comes with Windows and can be easily installed by following the IIS instructions provided by Microsoft. However, Microsoft also offers a video tutorial for configuring FastCGI with IIS and PHP and even has a quick install program available to install PHP with IIS.

Once PHP is installed in IIS, all that's left is to create a new site in the "Internet Information Services (IIS) Manager" that points to the jQuery source directory.

The MinGW binaries will enable the `make` command and allow the Linux-specific shell commands to work flawlessly on Windows. However, the jQuery Makefile has a line that tries to find Node.js which causes the build script to think that Node.js is missing from your system. This is easy enough to correct.

After following the steps above you should be able to execute commands in the Windows Command Prompt similar to Unix-like environments. This should make it trivial to work with the jQuery source code. The basic steps above could be used to make development of almost any Linux-centric project easier on Windows. 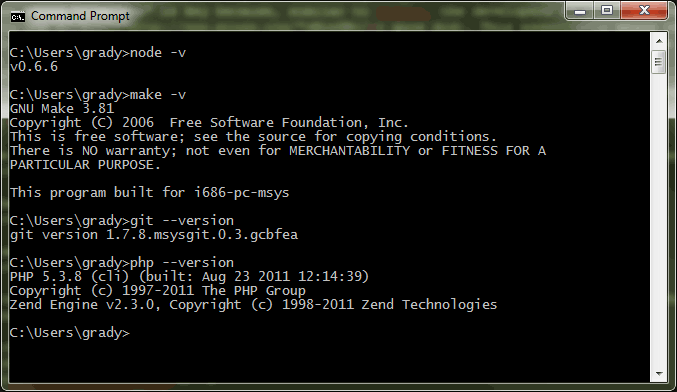